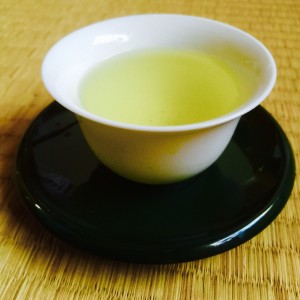 Sencha is by far the most popular type of Japanese tea. Its share accounts for more than 80 percent of total tea produced in Japan. Unlike the shaded gyokuro, tea leaves meant for making sencha get the most of the sun power which fills them with catechins and vitamins. Freshly plucked tea leaves are immediately steamed for about 30-40 seconds to prevent oxidation. This is different from Chinese green teas which are pan fried with same purpose. This difference in the production process makes the taste of Japanese sencha grassier vegetable flavor and slightly more astringent taste then in pan-fried Chinese green teas. The regular steamed sencha infusion produces a liquid more yellow than green, less green than the deep steamed variety of sencha — fukamushi sencha (steamed for twice or thrice longer time thank the regular sencha).

Then they are rolled, shaped and dried. In the end the rolled leaves look like needles. The rolled and cylindrically shaped leaves become aracha — crude tea which is still considered to be an unfinished product because of high percentage of humidity — about 5%.  Aracha is then sold to tea wholesalers who do the so-called hi-ire — the final drying that leaves just about 3 percent of humidity. Finally the leaves are sorted and divided into differing quality groups such as kukicha (twig tea), konacha (tea dust or powder), mecha (bud tea) and other byproducts of sencha production process known as demono. This above mentioned production process is relatively new and is said to have been invented in 1738 by Nagatani Sōen in Uji, Kyoto in 1738.